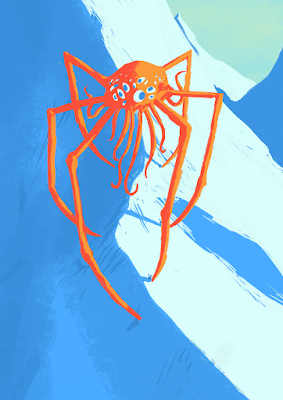 The Shivhad is a strange creature that will build its nest in cold, mountainous areas. Despite its crab-like appearance it is a being of uncertain origin and immense intellect. While other creatures are compelled to expand their territory, secure wealth, food or a mate with which to reproduce, Shivhads appear to be driven by none of these motives. Where Shivhads have made contact with other races they establish themselves as near deities, ominously demanding a toll of a weekly sacrifice. Whether this is merely to indulge a power fantasy or fulfill some darker function has never been ascertained; Shivhads speak nearly all languages but are so unthinkably dangerous that very few races will dare to provoke them. A Shivhad is usually the size of a large house.

This week's theme (a feature we'll probably instigate with more formality sometime soon) is that both our creatures are from the Frostburn book, one of many "add-on" books for D&D which introduce new weapons, quests, spells and monsters. Frostburn is, as you might expect, focused on creatures that live in incredibly cold environments.

The Shivhad is the first "epic" creature we've illustrated here - "epic" in Dungeons & Dragons being a term that describes very high level play (above level 20, which is initially as high as you can get). Basically, to kill one of these you need a team of adventurers of near demigod-like skill and experience. I really like how inexplicable the Shivhad is - a giant, superintelligent crab that lives in glaciers. I think it's pretty original as fantasy creatures go.
Posted by Joe Sparrow at 18:07