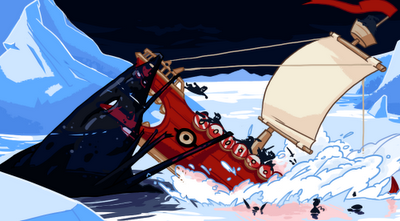 The Reekmurk is one of serveral kinds of water-dwelling oozes. They are normally found in underwater caverns in the depths of frigid arctic oceans, but tectonic movement will release them from their normal home and force them to the surface. It is a formless black shape, not unlike a cloud of ink or oil slick, with thin tendrils spreading out. It's practically invisible in the darkness. It's size means it can easily take down ships, its acidic body burning through wood and its foul poisonous vapours weakening life. This creature is weak to sunlight, which can kill it or drive it back to the depths from which it came.


The ooze is an iconic Dungeons and Dragons creature that we've been kind of avoiding. All oozes are pretty much the same thing; a mindless, destructive blob. They vary little in appearance, save for colour and mild size differentes. The best known one is the Gelatinous Cube, which is exactly what is says on the tin. Of course they all have different abilities, but at the end of the day you're still looking at a blob.

But then again I suppose the challenge in illustrating an ooze is to show it in action.
Posted by Blanca Martinez de Rituerto at 17:35