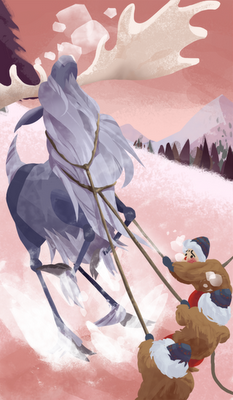 The Megaloceros is a gigantic deer that wanders in herds over the frozen tundra. Its likeness is found carved out of bone, stone and wood in many towns and tribes, since its commonly used as a totem creature. Atop its skull are two massive horns, its primary means of defence. If you are not trampled underfoot, the deer will gore you with its horns, lift you up with them, and toss you away. Their skulls are coveted as ornaments, and live ones make powerful mounts.


This is the first chance either of us have gotten to do something that properly goes under the animal catergory. Most animal-like creatures in D&D have some kind of magical power; anything that falls under the category of an animal is just your average, mundane critter. Not something that's really meant for a fantasy art blog. We have more interesting things to draw than a dolphin or a badger.

But these guys are pretty exceptional. A megaloceros is an actual prehistoric creature (the Frostburn book has a lot of those) that roamed the world when it was a little bit colder and animals were a little bit bigger. A simpler name for these guys are Irish Elk, even though they aren't really Irish. The skeletons for these are amazing to stand next to.
Posted by Blanca Martinez de Rituerto at 18:33