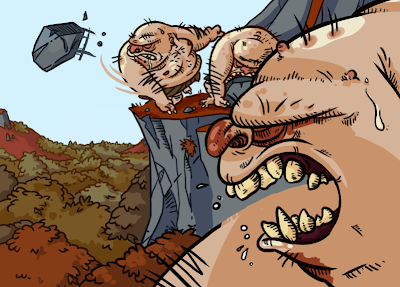 The Hill Giant is the weakest, stupidest and smallest of all giants, and the ones whose appearance most closely resembles humans. Their intelligence is too low to form any kind of efficient society. Despite this, they are still skilled in the taming of dire wolves and strong enough to be a threat to villages. One of their preferred methods of attack is to hurl heavy rocks at their opponents, or to trample smaller creatures underfoot. Of the evil giants, they're probably the most open to servitude to other creatures, and are often hired as mercenaries by warlords or spellcasters.


Something that was quite useful for this post was looking at photographs and videos of strongmen --not bodybuilders, but men who build their bodies to perform real feats of great strength, muscles that serve a purpose. These men usually have quite thick torsos, bellies and arms, making them look like giant hairless bears. I also looked at Scottish Highland games, which have the sports such as who can flip a tree the best (caber toss) or throw stones the farthest (stone put). They're really super impressive.
Posted by Blanca Martinez de Rituerto at 18:44