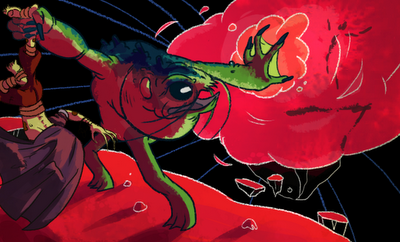 The Slaadi are hermaphroditic toad-like creatures born of the Everchanging Chaos of Limbo, a highly morphic and dangerous dimension that only the most willful can control. The Slaadi have a parasitic form of reproduction, being born of egg implantations or diseases they inflict on other creatures. If the affected creature is a spellcaster, a Green Slaad is born. It's more intelligent and powerful than its lesser bretheren, has shapeshifting abilities and can summon others of its kind.

The Slaadi are a well-known trademark race of the D&D universe. Despite being creatures born of chaos, they aren't motivated by good or evil, though they are still destructive enough to be cast as villains. They are the only creatures who can effortlessly control the morphing of Limbo, as they're the only true natives of that plane. All Slaadi look like bipedal toads, but that isn't their original form. They are ruled by two Slaad Lords; one is a black skeleton and the other a golden ameoba. They decided to seal the Slaad race in their current form to prevent them to mutate into something more powerful.

Most Slaadi are red or blue, and they're the only two with the ability to reproduce. A Green Slaad is rare, and the longer it lives, the more powerful it becomes. If it lives long enough, it can become a Black Slaad, a creature too strong for the most powerful devils and dragons to destroy. Thankfully, it takes at least 400 years for a green to go through all the steps and rituals necessary to become black.
Posted by Blanca Martinez de Rituerto at 10:01