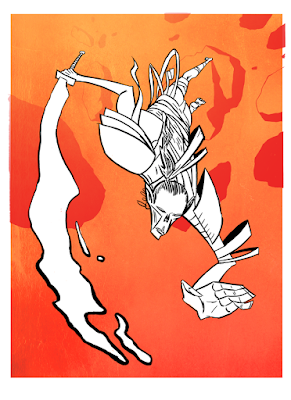 Githyanki are vicious, gaunt humanoids who live in societies strewn across the Astral Plane, the vast, timeless space between dimensions. Long ago bred as slaves to the ancient Illithid empire, the Githyanki were led from captivity by their ancestral leader Gith, in a great war which nearly wiped out the Illithids altogether. Now, wracked by internal conflict, the Githyanki are little more than a race of pirates, adding to the dangers of astral travel. They build their fortresses on the petrified bodies of dead gods adrift in the void.

The Githyanki are a weird sort of race in D&D, looking a little like a cross between orcs and elves (if such a thing is concievable). Not only are they essentially pirates, they are space pirates, which is pretty cool in my book. I inked this one by hand in Photoshop after making some custom brushes, and I'm pleased with the result. I tried to make up for the fact that they're usually depicted as barely clothed humanoids by doing a ridiculous upside-down foreshortening thing, but I think it gets the zero-gravity feel of the Astral Plane across fairly well. Oh, and they use these cool mercurial swords.
Posted by Joe Sparrow at 23:24