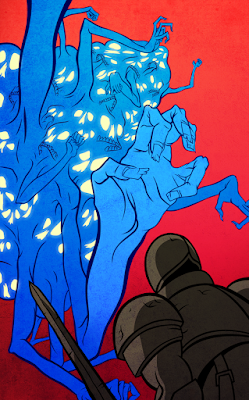 A Necronaut is a terrifying sight. Summoned as servants by Demons of the outer planes, they are formed from thousands of undead souls bound together in a colossal, clambering ziggurat of death from which long, bony arms protrude and hoist them on their destructive journeys. Necronauts are employed as a demonstration of brute necromantic might, requiring a huge amount of dead to summon and inhuman will to control.

A lot of undead creatures are just dead versions of living things - human skeleton, orc zombie, etcetera etcetera. What I really like are the more inventive necromantic creations that only things like Demons can pull off. This was fun to draw - I feel like I could have made it look a little corpsier but I just got to a point where I liked the way it looked.
Posted by Joe Sparrow at 00:43