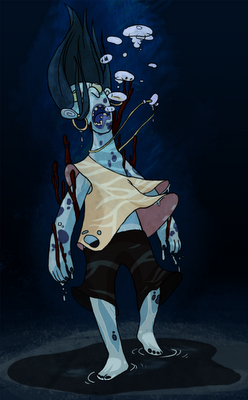 Rising from the depths of cursed water, the Drowned are the unfortunate creatures that met a certain aquatic demise. They are commonly found near ports or beaches, and anybody that approaches this undead creature will soon find that their lungs are filling up with water. They always have about them a cold cloying aura, their death, which will cause living creatures to drown on land.


Undead are a bit difficult as creatures. Not because they're hard to draw, but because they tend to be a lot of the same. Mostly corpses or skeletons of some kind, so you have to find monsters that have something interesting about them if you want to draw them.

Like for example a monster that's basically Samara from The Ring.
Posted by Blanca Martinez de Rituerto at 22:23