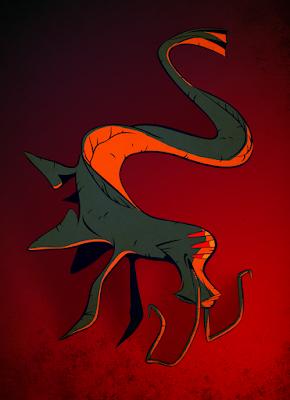 Aboleths are a strange race of giant aquatic creatures. Bearing similarities to whales, eels and even cephalopods, they are among the oldest creatures in existence, but by no means the most primitive. Despite their appearance, they live in sophisticated societies, building huge, alien undersea cities in the deepest oceans. Despite their sophistication, the Aboleths are generally hostile to other younger races (such as humans), and their propensity to dabble in dark magics is good cause to leave them well alone if possible.

Aboleths, like Beholders, have been a Dungeons & Dragons staple since its very first edition. Most pictures show them as three-eyed catfish creatures, so to make it a little more interesting I tried to develop the head and face a little. I feel, again, like I should have made more effort with the background on this one (especially as it'd be interesting to think about what kind of cities these things build), but anatomically I'm pretty happy with it.
Posted by Joe Sparrow at 10:28