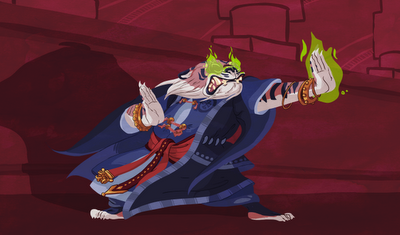 Rakshasa are a malicious breed of sorcerous shapeshifters. Their natural form is that of a bipedal tiger, but they can take on the appearance of any humanoid creature. They like to place themselves in positions which lets them rule over others. Their one downfall is their hands, which are reversed no matter what form they're in.

Rakshasas are one of my favourite monsters. I like tigers, I like shapeshifters, and I like mythical creatures that have a tell when they're in different forms (like a vampire's lack of reflection, kitsune's fox shadow or the Devil's horns or hooves). The monster originally comes from Indian mythology, which can open up some interesting story paths. Plus there was always something that seemed strangely honorable about rakshasas, like they might not kill you if you genuinely impress them.
Posted by Blanca Martinez de Rituerto at 15:58