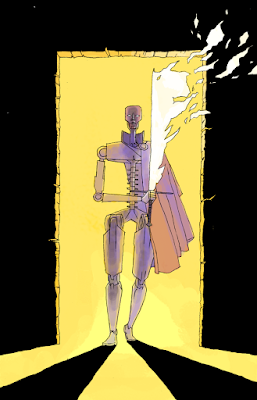 A Kolyarut is a clockwork knight from the plane of Mechanus, a dimension of severe, electronic order where magical machines rule. It is an agent of law and order whose sole purpose is the punishment of those who break contracts, oaths and bargains. A Kolyarut, once set in pursuit of an oathbreaker, relentlessly follows him or her across the planes until justice has been meted out.


Traditional D&D lore gives the Kolyarut a romanesque feel, essentially making it into a robotic legionnaire with a bronze breastplate and flowing red capes. I wanted to make it simpler and scarier, paring it down to an almost skeletal form that seems deceptively delicate whilst still looking like something that would keep following you to the ends of the earth.

Influenced by franco-belgian comic book artists like Moebius and Francois Schuiten. Check them out!
Posted by Joe Sparrow at 22:07