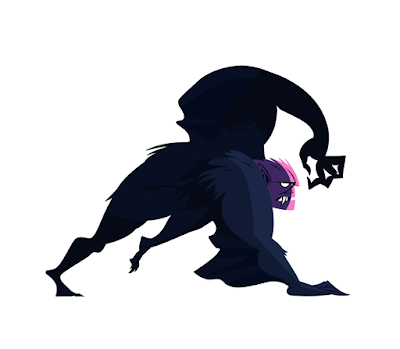 The Desmodu are a race of subterranean bat-men. In contrast to their fearsome, apeish appearance, they are generally good-natured creatures who are more likely to help adventurers than eat them.
Desmodu actually have a sort of reddish hue to their fur (as seen in some bats) but I favoured the bluer end of the spectrum to try and light a creature of darkness more convincingly. I consciously went for a Bruce Timm sort of thing with the style. The colour is obviously all vectors, which can make images look a little flat but is satisfying to be because it's one of the few ways I can "finish" a sketch and not feel like I've lost too much.
Blanca's post will be a little late this week (tomorrow, probably) because she's in Spain.
Posted by Joe Sparrow at 17:55